Beyond assessing and reporting: Acting on evidence of inequity in the in the Maritime provinces

Since releasing its public health roles for improving health equity, [1] the NCCDH has found examples of public health organizations at all levels that have championed the role of assessing and reporting on the existence and impact of health inequities. 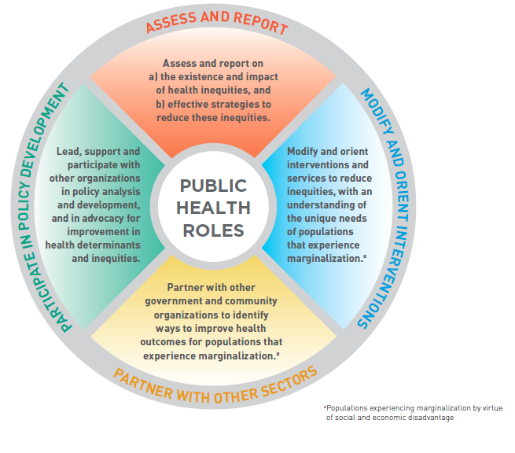 The Public Health Agency of Canada and the Pan-Canadian Public Health Network, for example, released the Key health inequalities in Canada: A national portrait (2018) report and launched the Pan-Canadian Health Inequalities Data Tool that allows users to explore equity indictors by a range of stratifiers, such as race, deprivation and Indigenous status. Likewise, British Columbia and Quebec have released health equity reports and atlases, respectively.

The examples below demonstrate how they are using data to support action in with the other three public health roles for improving health equity:

The examples above are just small sample of the ways that data on the existence and impact of health inequities are being acted upon by public health organizations. In the coming month, we will feature accounts from additional organizations describing how they are acting upon their assessment and reporting on health inequities in their jurisdictions.

The NCCDH thanks the following individuals for providing practice-based examples for this post:

[3.] D’Angelo-Scott H. An Overview of the Health of Our Population Capital Health, 2013 Part 1 [Internet]. Halifax (NS): Capital Health; 2014 May. Available from: www.cdha.nshealth.ca/system/files/sites/.../population-health-status-report-part-i.pdf

[4.] D’Angelo-Scott H. An Overview of the Health of Our Population Capital Health, 2013 Part 2 [Internet]. Halifax (NS): Capital Health; 2014 May. Available from: https://www.cdha.nshealth.ca/system/files/.../population-health-status-report-part-2.pdf