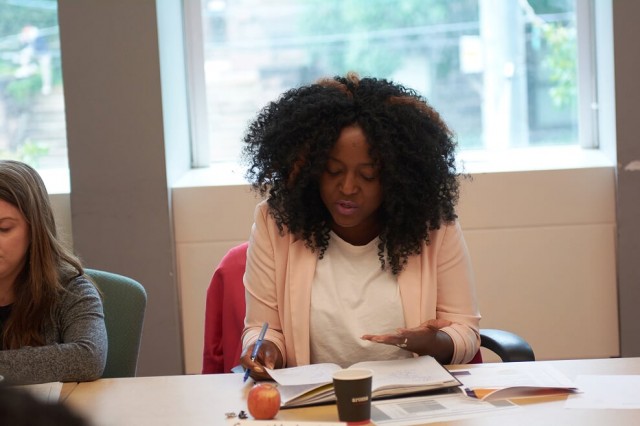 Reflections of a Black woman on racism, Indigeneity and Otherness in Canada

This blog post is part of a series on an anti-racism initiative at the NCCDH. The post is a personal reflection authored by an NCCDH staff member and is focused on her experiences of racism as a Black woman, intersections between settler colonialism and colonialism experienced elsewhere and reflections on relationships with Indigeneity.

My commitment to social justice feels like an entrenched part of my identity. I was born and raised in Yaoundé, Cameroon, to middle-class, Anglophone parents. Both my parents were working professionals and had taken up issues of social and economic justice in their own ways. Raised with an awareness of gender politics, I learned feminisms from my human rights lawyer mother, my aunties, my grandmother and my father.

Racialization is a process

Living in Canada since 2001 has connected me to different ways of understanding myself and, by extension, has influenced my relationship to different social justice struggles. I have come to viscerally understand racialization as a process, bounded in space and time.

In many ways, I have become “Black” in Canada. I often get strange looks when I say this. No, the colour of my skin has not changed, but it has come to have different meanings in comparison to my earlier life in Cameroon.

Less than a month into life in Toronto, my "Blackness" became very apparent. While my consciousness did not change substantively, the way the world reacted to me did. I remember once calling up a hair salon and asking if I could come in to get my hair coloured the same day. "Absolutely," they said. "We can fit you in."

When I arrived a few minutes later, the salon went completely silent. I saw the looks of shock and confusion pass between a number of staff members. Eventually, a young white woman walked up to the counter. Struggling to find the words, she asked if I needed help and eventually said she was terribly sorry, but they didn’t do "my kind of hair."

This, and many other seemingly benign encounters, is called a microaggression.

Microaggressions are the frequent, everyday signals that communicate to Indigenous and other racialized peoples that we do not fully belong in the social, cultural, economic and political fabric that makes up Canada. [1] They take a toll on our bodies and psyches and contribute to the "weathering effect" of racism. [2]

Living in Canada, I have learned what the cold hand of racism feels like: What it's like to walk into a place of business and have it go silent, to have my way of speech come as a pleasant surprise to many, to be one of very few Black people or people of colour in professional spaces and to have racism take up way too much mental and emotional space.

Black and indigenous peoples: What is shared?

Through deeper explorations of Black and African feminisms based on my own experiences and the works of writers such as bell hooks, Audre Lorde and Ama Ata Aidoo, I have developed the language and skills to understand and dismantle racism. As Blackness has become a more salient aspect of my experience (both in positive and negative ways), I have also grown in the way I think about my relationship to Indigenous peoples. I often think about a shared experience of colonization.

Colonization in the Americas and Africa is a deliberate endeavor to exploit and destroy peoples, lands and resources with dire consequences for health and well-being. For Black and Indigenous peoples, certain aspects of our social identities are constructed in ways that were not of our choosing. Racist and racialized systems are designed to make the domination and control of our beings acceptable.

Black and indigenous peoples: What is distinct?

It is also clear to me that as first peoples, Indigenous peoples have unique concerns, rights and aspirations in relation to Canada. Settler colonialism has very different implications for Indigenous peoples than it does for settlers (including people of colour).

It has been important for me to learn more about Canada's history before colonization, to read the works and writings of Indigenous people in Canada and elsewhere, to read and hear stories that are not only about oppression but also about resistance and hope (e.g., the organization Women of All Red Nations, the Media Indigena podcast, works by Aboriginal women writers), to listen to the music of Indigenous artists (e.g., A Tribe Called Red), to watch films by Indigenous filmmakers (e.g., Alethea Arnaquq-Baril) and to support decolonization movements led by Indigenous peoples (e.g., Idle No More).

In writing this document I made an explicit decision to discuss anti-Indigenous racism, anti-Black racism and other forms of racism as central pillars of White supremacy that lead to racial health inequities for Indigenous and racialized peoples. This conceptual connection facilitates both understanding and action and hopefully opens up more spaces for Black and Indigenous peoples to question and deepen ways of working together. [4]

At the NCCDH, I am actively exploring how to develop better partnerships with racialized and Indigenous scholars, practitioners and organizations. Our goal is to have these relationships be meaningful and positive for all involved. As an organization, this will help us produce and share knowledge that better reflects communities affected by racial health inequities.

Colonization is not equivocal

Many questions remain. As Tuck and Yang remind me, “Decolonization is not a metaphor”  and experiences of colonization are not equivocal. Coming from a colonized country still being impacted by neocolonial approaches, how do I work towards decolonization, which Tuck and Yang define as “the return of Indigenous land and life." [5]

What claims do I make of Canada that are incompatible with Indigenous needs and sovereignty? How does my relationship with indigeneity shift if I actively align my work in the service of decolonial anti-racist practice?

These are some of the questions I hope to explore when the NCCDH and other partners convene Indigenous and Black public health practitioners and researchers in March 2019 in Toronto to discuss opportunities for mutual growth and support in the context of public health equity activities. Please email me if you would like to be involved.

[4] Amadahy Z, Lawrence B. Indigenous peoples and black people in Canada: settlers or allies? In: Kempt A, editor. Breaching the colonial contract: anti-colonialism in the US and Canada. Netherlands: Springer Science, Business Media; 2009. p. 105-136.